Register a new account, then authorize the application. After the trial your account automatically switches to the free version.

What Do Your Customers Actually Think About Chatbots?

Chatbots today are what mobile apps were in 2012. Every business wants one. But what do consumers actually think of them?

That’s what we were wondering here at Userlike. We found studies on chatbot perceptions, but we weren’t convinced of their reliability. Most were published by companies with a clear interest in proving the benefit of chatbots, like chatbot building platforms. 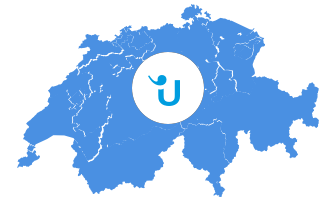 At Userlike, we don’t have such a vested interest. We provide live chat software for human support teams, and we offer a simple chatbot and chatbot API for our customers to connect their sophisticated bot to.

Bots aren’t our main shebang, so in a sense we’re Switzerland; neutral, but curious about the fuss surrounding chatbots to see whether this is an area we should develop further in.

The goal was to learn if respondents had used a chatbot before, how they felt about the experience, and the pros and cons of chatbot use. We also dug deeper to find out how the consumer views a company that employs a chatbot, and in which situations a chatbot is helpful. Some answers were expected, but others were just plain surprising. We’re excited to share our findings with you.

Continue reading for the full results.

1
Nearly every respondent has interacted with a chatbot before

This is likely due to selection bias and majority of our respondents being young, but it’s surprising nonetheless. But what was even more surprising to us, is how positive the respondents felt about chatbots. 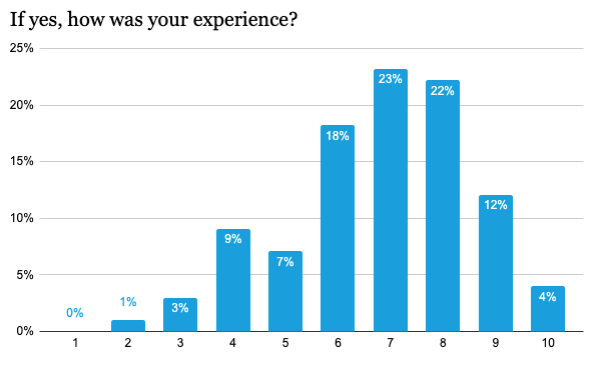 According to Entrepreneur , “Chatbots are giving people the critical engagement factor of welcoming and belonging.” People have expressed that they often feel unappreciated by the companies they do business with, and a chatbot could bridge the communication gap.

When given the choice, a consumer would rather speak to a chatbot directly to solve an issue rather than wait for an available agent.

Voice of Customer (VoC) platform Usabilla’s research on customer interaction with AI supports this opinion. At least 54 percent of respondents said they would prefer to speak to a chatbot instead of a human customer service rep if it saved them 10 minutes.

Respondents may prefer to speak with a chatbot directly, but they still want an easy option to reach an agent just in case.

Additionally, our data showed that people would chat with a bot to connect with an agent who can assist with their specific inquiry. Perhaps it’s because respondents are familiar with phone trees, which ask a series of prompts before redirecting a call. 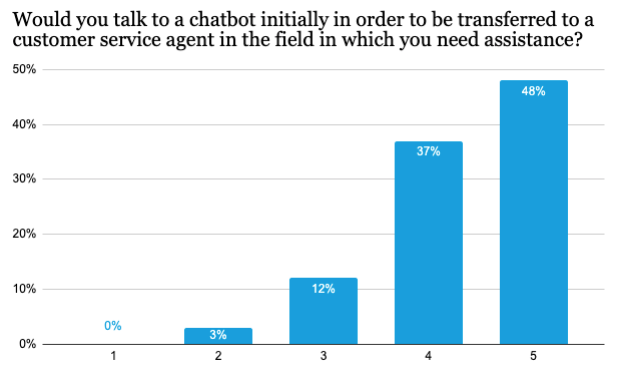 Chatbots have the potential to strongly reduce service costs for the company, so we were interested whether consumers would perceive companies that deployed them as cheap.

So we asked one question about the perception of cheapness, and one about innovativeness. And to our surprise, innovativeness was the clear winner. Chatbots might make things cheaper for the company, but that doesn't seem to reflect negatively on the company. Double win! 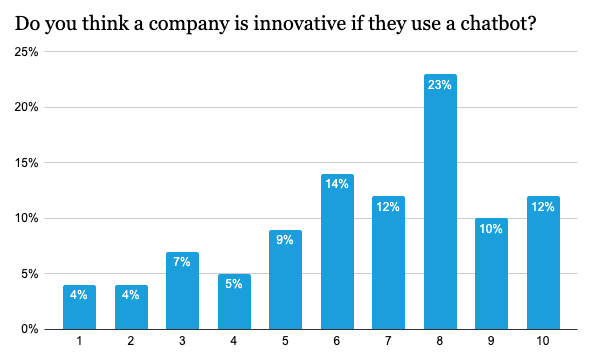 5
Chatbots are fast and convenient, but have their limits

Respondents like that chatbots are immediately available and respond quickly, but most people said that chatbots have limited intelligence and aren’t suitable for filing complaints or solving issues. 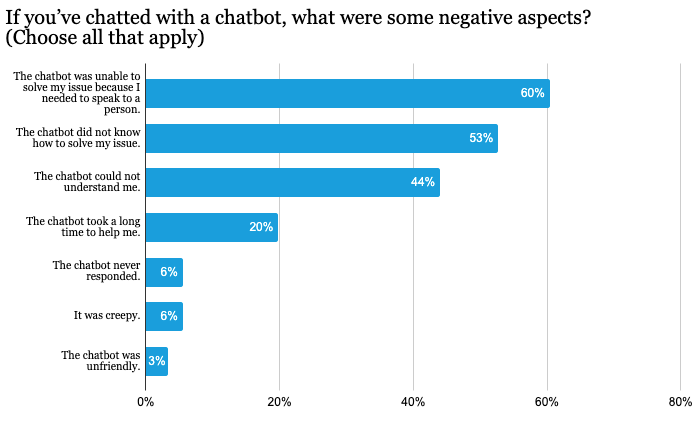 Respondents are willing to chat with a bot for simple inquiries (product specifications, order status, shipping). However, this begs the question: How much do people trust chatbots?

At least 36% of respondents would use a chatbot to pay a bill and 41% would use it to check an order status. Respondents aren’t willing to settle disputes through bots, but what level of personal information are they willing to share? Just account access, or more out of pure convenience? 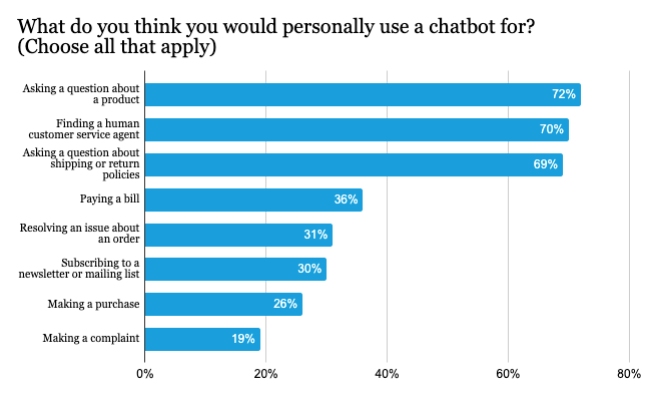 In addition, do people want more websites to use chatbots? Perhaps if the AI was spectacular, but this is just speculation.

7
Chatbots should never pretend to be human

More than half of our respondents (59%) want chatbots to make it clear that they’re a bot, which is completely fair. Bots should avoid entering the uncanny valley ; it’s deceptive and downright creepy.

8
Chatbots should be easy and fun to talk to

Despite respondents saying that they want a chatbot to state it’s a bot, they also wish for it to sound more human. Even though this is incredibly contradictory to the previous point, consumers want their bot conversations to be natural and pleasant.

Others also said that chatbots should occasionally make jokes or show emotion.

Humor is a nonsensical algorithm that shouldn’t matter, but it does. The argument is that chatbots are engaging in conversations and should therefore have a personality and sense of humor.

But until someone can create AI that organically crafts original witty jokes, it’s tough to expect most companies to develop their own funny chatbot. We can’t all create a Poncho (RIP) no matter how hard we try.

We created our survey with Google Forms and paid 300 Euros to post it on Amazon’s Mechanical Turk , a crowdsourcing marketplace.

Respondents were paid to take our survey, so we created a handful of contradicting questions to filter out 'bad' surveys. If a respondent said they loved using chatbots in one question, and then said they hated them later on, we knew they were just in it for the moolah. 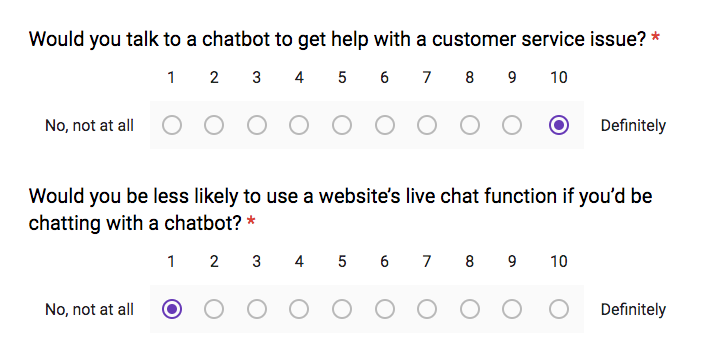 The chatbot love is strong with this one

We used SurveyMonkey ’s sample size calculator to determine how many people we needed. Some questionnaires had to be rejected, but in the end we collected 100 quality responses before closing the survey.

The survey was 22 questions long and devoid of any confusing technical jargon to make it appropriate for everyone. We learned that majority of our respondents are male and between the ages of 28-37 years old.

Not many baby boomers (only 11.9%) responded to the survey, but this is not very surprising. People aged 55 and over are less likely to use live chat, which may mirror chatbot usage.

How reliable is our data on consumer chatbot perceptions?

Our sample of consumers responded favorably toward chatbots, which may translate into the greater population. There is a chance answers were skewed because it was a paid survey and people responded in a way they thought we wanted to hear.

Mechanical Turkers might also be more tech-savvy than the average person. To gain a broader insight, we are considering another research approach by collecting responses on the street.

Overall, chatbots are making a good impression – better than we expected. Our research could be improved but we can be fairly sure that most millennial consumers perceive chatbots positively.

Leah is a copywriter at Userlike. She’s a proud Texan who spends her free time cuddling her dog, learning Japanese and rereading Harry Potter.