The Story of Avocadostore: An End to Hippie Fashion

Eco clothes are for grayed hippies, look like potato bags and are made of fabrics that scratch your skin. On top of it, they’re crippingly expensive. Right?

Avocadostore ’s managing director Mimi Sewalski is familiar with prejudices about eco fashion. She’s been part of the online marketplace’s target group well before she entered as a regular in 2011. At that point, she admits, she might have been “a little naive” to think that the whole world cares about the issues the company addresses just because many of her friends do.

While the latter certainly were unrepresentative and biased, her family promised a better testing field for everyday eco fashion. And still, here they were, echoing the same old clichés when presented pieces from Avocadostore-sellers. “The organic label tends to excite prejudices in people,” Mimi notes. Then, looks or price seems to be all the same to them.

At the time of Mimi’s arrival, Avocadostore’s numbers actually suggest that many consumers have overcome their preoccupations, Avocadostore is growing rapidly early on. But it also benefits from being the only marketplace of its kind in Germany. A precarious advantage.

Seeing how hard it is to win over even those who she expects to trust her first, Mimi senses that Avocadostore will need more than quality products with a sustainable background at a reasonable price. They would need to find a way to leverage the bias that still keeps away many mainstream consumers.

American measurement company Nielsen found that in 2015, 66% of consumers were willing to pay more for sustainable brands , up from 55% in 2014. People’s interest in sustainability is not in question.

Already half a decade earlier, Philipp Gloeckler and Stephan Uhrenbacher had the idea to build Avocadostore as Germany’s first ‘green’ marketplace. The currently Hamburg-based 20-employee company created a rise in revenue from €100,000 in 2011 to above €5 million in 2015 and was later labelled one of the fastest growing enterprises in Germany by Focus magazine and Statista. Mimi, who now leads the company with 2015 new entry Daniel Olesen-Fett, describes how the founders started out:

“The two of them noticed that in Berlin, where Philipp was at that time, and also later in Hamburg, there were countless little labels around the corner, which printed on shirts themselves and sold from tiny stores. Those labels often had to close down because their revenues were too low. So there was an obvious will in people to offer and highlight alternatives to the established fashion industry, but they just couldn’t live off it.” 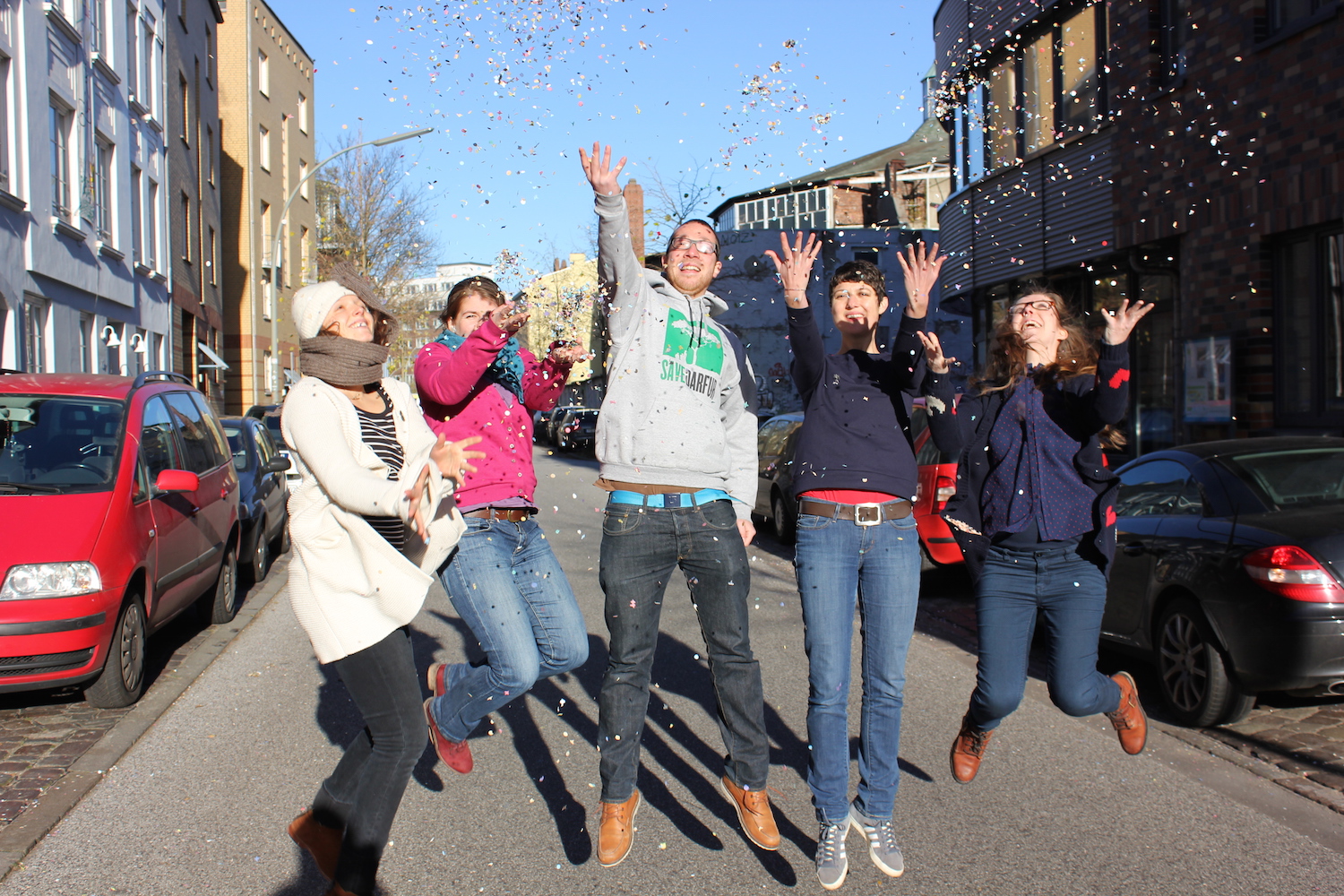 Gloeckler’s and Uhrenbacher’s plan was to provide such vendors with a bigger audience and a simple, low risk process: a centralized online platform to sell from. Consumers, at the same time, were to receive sustainable alternatives to basically all conventional products concentrated in one place.

Consumers fear to be labelled 'tree-huggers'

Mimi was and is part of the target audience herself. But she’s also a child of the 80s. She grew up in a time when logos were everything. She remembers “how back in school everyone wanted to have a t-shirt by the brand Chiemsee. We would give all our pocket money to have a piece with that logo on it.” Now she wishes people would be same as willing to spend more for a brand that stands for socially and environmentally responsible production, “or at least good quality.”

Paradoxically, this is the case only as long as the brand avoids any association of the product with those who had based the eco fashion movement on these exact ideals in the 70s. As ecofashionworld describes, back then eco apparel consisted of “sewn together patches or burlap and tie-dyed fabrics that looked like canvas, which were never going to make it down a ‘fashion week’ runway.”

It seems that image still sticks in the consumer’s mind, now that eco fashion looks like all other contemporary fashion. Consumer scepticism about a product’s background is strangely paired with concerns about how much they’re going to be labelled a ‘tree-hugger’ when wearing it.

Mimi is well aware of the issue, which keeps away especially average consumers who are not deeply rooted in the eco scene but want to buy more responsibly. For Avocado store, this leads to a product marketing dilemma. They have to label their items as eco fashion to be visible to their core audience. But they can’t leave any room for associations with the past.

The issue could be one to even hurt a company whose growth is as auspicious as that of Avocadostore. Mimi tells us that in the early years of strong growth, most changes aimed at streamlining processes on technical level, not at reaching new customer groups. With the eco fashion industry booming like right now, this will be essential to keep emerging competitors at a distance.

Gloeckler and Uhrenbacher had already pulled out of the operational business when Mimi and her team found the solution. They understood that labelling mainly happens in the minds of consumers. And that that’s where they’d need to tackle it.

In another field trial with her family and friends, the managing director introduced products without presenting them as what they were: organic, sustainable items.

“I showed them crank flashlights or simply jeans, but in an almost incidental way. After all, an organic pair of jeans looks like any pair of jeans. I noticed that when I put a product’s story into focus, where it came from, how it was made, not the eco label, people’s interest in it grew rapidly.”

Now she needed to transfer this to Avocadostore’s website, to the best place for telling an item’s story - its product text. Here, Avocadostore now provides detailed, research-intensive background on materials and production, often expanding to a global context, comparing sustainable techniques to the negative impact of established mass production.

Be it multi-material shoes or a simple sponge , extensive information adds value by facts that leave no space for esoterism. The clothing itself and the image style are just what you’d expect from big fashion retailers, too. No dreadlocks, no hobgoblin-beards, no potato bags. 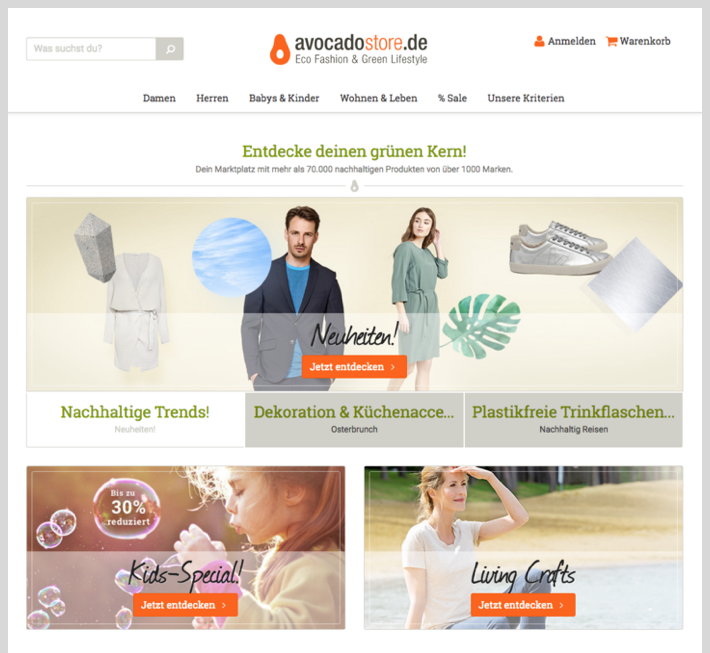 To add better overview to the large text chunks, Avocadostore came up with a detailed 10-criteria-system . It describes requirements to be met by a product in categories like organic farming, working conditions, durability or carbon footprint.

This strategy is similar to campaigns by businesses like C&A or H&M . Even these fast fashion giants have by now figured that sustainability is a responsibility. Although for them, it’s likely just an economic one .

The big players have a stable customer group through their almost entirely non-sustainable fashion lines. They can offer awareness-products as an upselling-option. Avocadostore, on the contrary, is reliant on a customer group that’s homogenous in their ethical values. Although this group is evidently growing, Avocadostore’s daily challenge is to show how they’re different in terms of ethics while showing they’re no different in terms of fashionability.

Numbers suggest that this is going pretty well. Today, Avocadostore is home to 460 sellers and around 85,000 items, their revenue grew by 80% in the last year. Armed with their very own shop software, they have big ambitions for the future. Mimi says their target is “to one day become a green amazon”, then probably thinks of some not-so-glorious reports about the Western world’s biggest marketplace and adds, “well, at least in terms of usability and variety.”